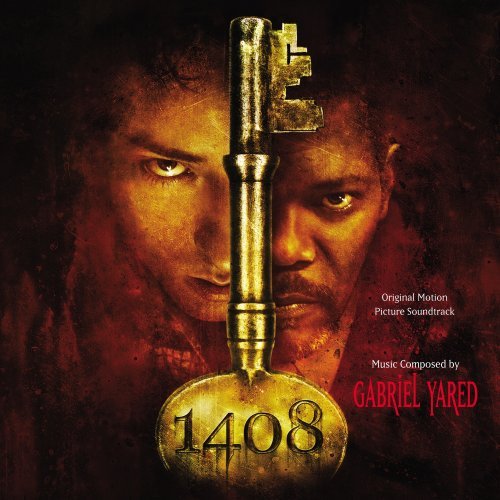 The original ending, available exclusively on the Director's Cut edition, sees the backdraft engulfing the room as Enslin hides under the coffee table, happy to see the room destroyed as he dies. Olin later approaches Lily and Enslin's agent at his funeral, where he unsuccessfully attempts to give back a box of Enslin's possessions, telling her, relieved, that Enslin did not die in vain. Olin listens to the recording in his car, hearing Katie's voice on the tape; he jumps in surprise as he catches a quick glimpse of the now horribly burnt Enslin in his rear view mirror. Enslin now bears resemblance to a ghostly man that appeared in several other scenes, including the window/mirror scene and in the painting of the schooner. The scene then changes to an outside view of the gutted 1408, with an apparition of Enslin disappearing after being called away by the voice of his daughter and the sound of a closing door.

Mike Enslin (John Cusack) is a skeptic author who debunks supernatural occurrences after the untimely death of his daughter Katie. Before this event, he used to write fiction, and a woman at a book signing asks him to sign a copy of his first book, a novel called The Long Road Home. After finishing his latest successful book, he receives an anonymous postcard of the Dolphin Hotel in New York City bearing the message "don't enter 1408". Viewing this as a challenge, Enslin attempts to book a reservation for room 1408, but the hotel will not rent him the room. However, after being informed by Enslin's agent Sam Farrell (Tony Shalhoub) that the Fair Housing Act requires hotels to rent unoccupied rooms, the Dolphin reluctantly reserves room 1408 for Enslin.

Arriving at the Dolphin, Enslin is pulled aside by the hotel's manager, Gerald Olin (Samuel L. Jackson), who warns him that no one has lasted more than an hour in 1408. Olin tries to be friendly with Enslin; he compliments him on The Long Road Home, offers Enslin an upgrade to the penthouse suite, an $800 bottle of cognac and access to documents regarding the deaths in 1408 if Enslin abandons his plan to stay in the room. When Enslin insists, Olin begins reciting the docet of carnage that includes seven jumpers, four overdoses, five hangings, three mutilations, two stranglings, one drowning and twenty-two natural deaths in room 1408. Enslin accepts the documents and the cognac but insists on staying in the room, frustrating Olin.

Once inside the room, Enslin pulls out his Mini Cassette recorder and dictates on the unremarkability of room 1408. As he examines the room, the clock radio suddenly starts blaring "We've Only Just Begun" by The Carpenters; he is startled, but dismisses it as a gag cooked up by Olin. When he calls for room service, the hotel operator agrees to requests Enslin didn't make, like ordering a sandwich or tickets to the Metropolitan Opera. Later, Enslin is startled again as the clock radio begins to play the same previous song. The clock's digital display scrambles to 60:00, and then starts counting down from 60 minutes. When he rips the clock's electrical cord from the wall, it continues to tick down.

Suddenly, Enslin is unable to hear anything, apart from a tinnitus-like ringing in his ears, and opens the window to check his hearing. The window slams down, cutting a large gash in the top of his hand. His hearing quickly returns and he goes to the bathroom to clean his hand, but is burned by the hot water blasting out of the faucet under incredible pressure. He then bandages his hand using a bandanna from his bag. Wishing to go to a hospital, Enslin attempts to leave the room; however, his key breaks off in the door and gets sucked out of the keyhole. The doorknob subsequently breaks off in his hand, trapping him inside 1408. Trying to find a way out, he sees a man in an apartment looking at him. Relieved, Enslin waves to him. The man waves back. Enslin motions calling the police; the man motions as if in confirmation. Enslin, noticing that the man mimics his actions exactly, picks up a lamp. The man does as well. Just as Enslin realizes it was a trick conjured up by the room, a woman creeps up behind the man across the street, picks up a stick and lifts it over her head, preparing to attack the man. Enslin whips around to face an old, seemingly deranged man brandishing a club. Then, just as suddenly he appeared, the man disappears.

Enslin begins to see and hear things, including visions of his daughter's time in the hospital shortly before her death, but he initially dismisses them as hallucinations, possibly due to a drug in the cognac. He makes several attempts to free himself from the room, such as trying to crawl outside on the ledge to the next room or crawling through the air vents, but logic-defying events (such as all other windows on the hotel's exterior disappearing, and a desiccated corpse chasing him through the ventilation shafts) prevent him from succeeding, all the while being assaulted by horrifying illusionary apparitions of 1408's former victims. Several times, he has illusions about his past traumas: he encounters his late, invalid father in a hospital room (whom he may have alluded to when he described a plot element of The Long Road Home), sees a memory of his family when Katie was still alive and re-witnesses Katie's death. Finally, he is literally trapped inside 1408 when the door and one of the windows are blocked by brick walls and the other window disappears. He manages to contact his estranged wife Lily (Mary McCormack) via video chat, but the conversation ends abruptly when the sprinkler system shorts out his laptop. All the while the room temperature drops, eventually to subzero temperatures. However, his laptop starts working again and he hears Lily calling out to him via video chat, but a doppelgänger of him hijacks the conversation, urging Lily to come to the hotel immediately and enter room 1408. As Enslin desperately tries to tell his wife not to come, the room begins to shake violently, and water explodes and floods out of a painting of a schooner lost at sea, pulling Enslin under the surface.

Enslin wakes up on the beach, the result of a surfing accident depicted earlier in the film. He soon finds Lily at his bedside in a hospital near his home in Los Angeles; she tells him that he was hospitalized after sustaining a concussion, leading him to conclude 1408 was just a dream. This reprieve is short-lived, however, when at the post office to mail a manuscript of his latest book (with a story about 1408) to his agent, a construction crew made up of hotel staff and guests begin to destroy the interior, revealing the walls and floor of 1408 underneath, now severely fire-damaged. He is still trapped inside 1408. Enslin then encounters his dead daughter, but as he emotionally embraces her she dies in his arms, then crumbles to dust as the clock radio's countdown approaches zero. Enraged, Enslin lashes out against what remains of the room until he falls to the floor, exhausted. When the clock radio finally reaches zero, the room changes back to its original, undamaged appearance.

The clock radio resets for another 60 minutes and the phone rings; when Enslin answers, the friendly female voice of the hotel operator informs him that he can relive the hour "again and again" or choose to take advantage of their "express checkout system". A noose appears in the bedroom and Enslin has a vision of him hanging himself; he tells the operator that he will not be checking out that way. The phone rings again, and the operator reminds him that his wife will be arriving in 5 minutes and will be sent right up to his room. He responds he is done arguing and is going to end the experience. When he puts down the phone, it starts to melt and a grave sounding voice starts reciting numbers and tries to dishearten Enslin.

Using a torn bit of his bandanna to turn the cognac into a Molotov cocktail, Enslin sets the room on fire, causing the hotel to be evacuated. Lily arrives just seconds afterwards and is stopped from entering the hotel, but tells the firefighters that Enslin is in 1408. Meanwhile, as the room tries to extinguish the fire, Enslin breaks a window with an ashtray, causing a huge backdraft that engulfs 1408. The firefighters force entry into the room and rescue Enslin as he curls under the coffee-table, delighted that the room is dying. Enslin recovers in a New York hospital, Lily at his bedside. He swears that he saw Katie, but Lily refuses to believe him. After his recovery, Enslin moves back in with Lily, beginning work on a new novel that has nothing to do with his previous cheap haunted sites series. While sorting through a box of items from his night in 1408, Enslin comes across his mini cassette recorder. After some difficulty he manages to get the tape to play; it begins with Enslin's dictation of 1408's appearance, but cuts in with audio from his interaction with the apparition of his daughter. Lily freezes in shock as she hears her dead daughter's voice coming from the tape recorder, and the film closes on Enslin meeting her shocked stare with one of grim vindication.