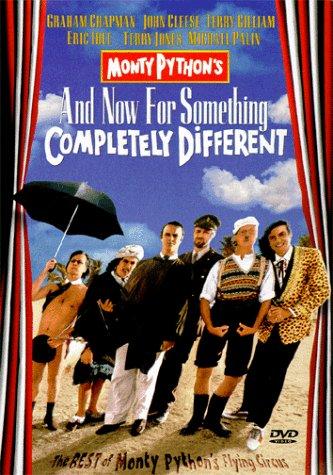 1. How Not to Be Seen: A government film which first displays the importance of not being seen, then devolves into various things being blown up, much to John Cleese's amusement.

2. Man with tape recorder: After the main title sequence animated by Terry Gilliam, which comes after the above sketch, a "The End" screen appears, but a stage emcee (Terry Jones) apologises for the cinema overestimation of the film's length and announces an interval. In the meantime, two short films are shown: One starring a man with a tape recorder up his nose and another starring a man with a tape recorder up his brother's nose (with a brief "stereo" segment at the end of the second film). (In a decided bit of irreverence, the tape recorder is playing La Marseillaise, the French national anthem).

3. Dirty Hungarian Phrasebook: After the above mentioned interval ends, a sketch plays in which a Hungarian immigrant (John Cleese) is arrested after a series of linguistic cock-ups in a tobacconist's (Terry Jones), beginning with "I will not buy this record, it is scratched" (believed by the Hungarian to be a request for cigarettes), then turning into various sexual innuendos ("Do you want to come back to my place, bouncy-bouncy?"). The incident reaches a peak as the tobacconist attempts to communicate "6 shillings, please" in Hungarian, and is rewarded with a left hook (presumably the phrasebook also attempts to create havoc for English people trying to speak Hungarian). The Hungarian gentleman is swiftly arrested for assault, but is released and the author (Michael Palin) of the fraudulent phrasebook is arrested instead.

4. Animation-Hand Plants and Things: An animation by Terry Gilliam depicting cut-out hands as plants and animals.

5. Animation-A Barber's Suicide: A barber puts shaving cream all over his head and cuts it off.

6. Marriage Guidance Counsellor: The marriage guidance counsellor (Eric Idle) flirts with and makes love to the attractive Deirdre Pewtey (Carol Cleveland), and her husband Arthur Pewtey (Palin) is somewhat depressed by this turn of events. His attempt to "pull his finger out" and end this nonsense fails miserably.

7. Animation-The Cannibal Baby: A man carries a baby in a carriage that eats old ladies, but the carriage is turned around by an irate woman and chases the man.

8. Animation-The Statue: After the above animation ends, an animated arm tries to remove Michelangelo's David's fig leaf, presumably covering his genitals, but an old woman's head is there instead and demands that smut like this not be shown on screen.

9. Nudge Nudge: The above animation ends and leads into a bar, where a man (Idle) asks another man (Jones) about his wife, with a relentless stream of sexual innuendos. It turns out that he simply wants to know, "What's it like?"

10. Self Defence Against Fresh Fruit: A teacher (Cleese) educates his students (Graham Chapman, Terry Jones, Michael Palin, and Eric Idle) how to defend themselves from anyone armed with fresh fruit.

11. Hell's Grannies: An uptight colonel (Chapman) warns the film not to get silly again after the above sketch. He then tells the director to cut to a new scene, which is discovered to be about antisocial old ladies. Other gangs referenced are the Baby Snatchers (men dressed as babies snatching people off the street at random) and vicious "Keep Left" signs, at which point the colonel stops the sketch.

12. Military March: A military squad does an extremely effeminate chant, which the colonel again finds silly ("and a bit suspect, I think"), and replaces with a cartoon.

13. Animation-Rampage of the Cancerous Black Spot: The animation depicts a prince getting a spot on his face, foolishly ignoring it and dying of cancer. The spot then goes out to seek its fortune and gets married to another spot.

14. Expedition to Mt. Kilimanjaro: Arthur Wilson (Idle) goes to Sir George Head (Cleese) to join an expedition to Mt. Kilimanjaro, but the interview rapidly descends into chaos due to Head's unusual case of double vision and another member of the expedition trashing the office. (The scene ends when Head is startled to see the next scene coming, as it presumably looks to him like a young woman with four breasts.)

15. Girls in Bikinis: Sexy women are seen posing in bikinis to the sound of lecherous male slavering, which ends abruptly when the camera pans to John Cleese reclining on a desk in a pink bikini and bow tie saying the phrase, "And now for something completely different."

16. Would You Like To Come To My Place?: A man (Palin) tells a police inspector (Cleese) of a theft, after an awkward silence he decides to invite said policeman to come back to his place.

17. The Flasher: A man (Jones) in a grubby raincoat appears to be flashing his naked body to women on the streets. It turns out, when he does the same to the camera, that he is fully clothed and simply wearing a sign that says "Boo!"

19. Animation-Conrad Poohs and His Dancing Teeth: The 20th Century Frog and MGM-spoofing logos introduce Conrad Poohs (an animated photograph of Terry Gilliam)and his Dancing Teeth, set to the music of Josef Wagner's Under the Double Eagle.

20. Musical Mice: Arthur Ewing (Jones) has "musical" mice, reputedly trained to squeak at specific pitches. He says they will play Three White Mice, but he simply starts hitting them with mallets and providing the tune himself. His audience is enraged by this and chase him out of the studio.

21. Sir Edward Ross: The audience chases Ewing through a TV studio, interrupting a scene where an interviewer (Cleese) calls Sir Edward Ross (Chapman) by a number of inappropriate names, such as "Eddie Baby ", "pussycat", etc.

22. Seduced Milkmen: A milkman (Palin) gets seduced at the door of a house by a lovely woman (Cleveland) but then gets locked in her closet with other milkmen, "some of whom are very old."

23. The Funniest Joke in the World: Ernest Scribbler (Palin), who is shown having just written the joke in the previous sketch and then discarding it, has a sudden inspiration and writes a lethal joke. It is snapped up by the army who send a despatch rider to collect it and translate it into German. It then goes on to become a deadly weapon in the Second World War. An animated man (based on a portrait of Henry VII of England) attempts to apologize for the poor taste of this sketch, but is distracted by a woman's flashing her breasts to him.

24. Animation-The Old Woman Who Cannot Catch a Bus: As the animated man from the previous sketch chases after the naked woman, an old woman tries to catch a bus, but it drives past. A second bus comes along, but it too drives past. A third bus is flipped over when the woman trips it with her foot.

25. Animation-The Killer Cars: Cars attempt to stem overpopulation by eating people. Eventually, a giant mutant cat is brought in to scare the cars off. This plan works perfectly, until the cat starts eating buildings. It turns out that the sketch is a story being narrated by an old man.

26. Animation-Dancing Venus: The mutant cat from the previous animation falls into a sausage grinder. The resulting "product" leads into the hair of Botticelli's Venus, who stands on her shell...until an arm comes out of the water and twists her nipple like a radio knob. Upbeat music plays, and Venus dances wildly until her exertions cause the shell to tip over, leading to...

27. Dead Parrot: Perhaps Monty Python's most famous sketch, Mr. Praline (Cleese) attempts to get a refund for his deceased parrot, but the shopkeeper (Palin) refuses to acknowledge the parrot's passing on.

29. The Restaurant Sketch: The employees of a restaurant (Jones, Palin, Idle, and Cleese) react with ever-increasing melodrama to a dirty fork given to a dining couple (Cleveland and Chapman), resulting in their horrible deaths. A punchline is then shown, in which Chapman turns to the camera and says "Good thing I didn't tell them about the dirty knife!"

30. Animation-Musical Interlude: A picture of Rodin's The Kiss appears, with the addition of several small holes along the woman's leg. The woman straightens her leg out, and the man plays her like a wind instrument

31. Animation-How To Build Certain Interesting Things: Garbage is dropped on a stage and banged repeatedly with a hammer. It takes on the shape of a wheeled arm holding a gun, which rolls into the next scene.

32. Bank Robber: A bank robber (Cleese) mistakes a lingerie shop for a bank, and attempts to rob it. After the shop owner (Idle) stymies his hopes of robbery, the robber is somewhat put out by his error, and makes do with a pair of panties.

33. People Falling Out of High Buildings: A worker (Idle) sees people going past the window downwards, but his co-worker (Cleese) is uninterested, until they realize that there is a board meeting occurring up stairs and make a little wager that Parkinson will be next. A man played by Chapman then writes a letter of complaint, but just as he writes "I have worked in tall buildings all my life, and have never once--", he is somehow propelled out of a tall building.

34. Animation-The Bug: A bug with humanlike features goes to sleep and wakes up as a (effeminate male) butterfly.

35. Animation-The Three People: Three people walk in snow singing the title of the next skit, in choral harmony.

36. Vocational Guidance Counsellor: Herbert Anchovy (Palin) no longer wants to be a chartered accountant, and harbours dreams of being a lion tamer. The counsellor (Cleese) suggests that Anchovy should instead work his way up to lion taming, via banking, an idea which Herbert initially rejects, until he is informed that the animal he thinks is a lion is in fact an anteater, and that mere stock footage of a lion scares the life out of him. He then desperately cries out that he just wants to see his name in lights, a wish granted by a magic fairy (played by Idle with a moustache).

37. Blackmail!: Herbert is initially mystified by his sudden role of hosting the TV show "Blackmail!", but gets into the idea very quickly, and does his new, somewhat questionable duty with enthusiasm and panache.

38. The Battle of Pearl Harbor: The silly-hating colonel appears again, and introduces a group of women (the Pythons in drag) re-enacting the attack on Pearl Harbor (or rather, beating each other with their handbags in mud). They are led by Rita Fairbanks (Idle).

39. Romantic Interlude: A man (Jones) and girlfriend (Cleveland) begin making love, and several suggestive images are shown (an industrial chimney collapsing in reverse, a torpedo being fired, etc.), but the images are in fact only films being played by the man. The woman asks whether he's actually going to do something or just show films all night, and the man replies with "Just one more, dear"

40. Upper Class Twit of the Year: Five mentally addled members of the landed gentry go through a challenging obstacle course, with such events as walking along a straight line, jumping over a wall made of two rows of matchboxes and shooting themselves in the head (one twit is so inept that, in an attempt to back up a car, he somehow manages to run himself over) 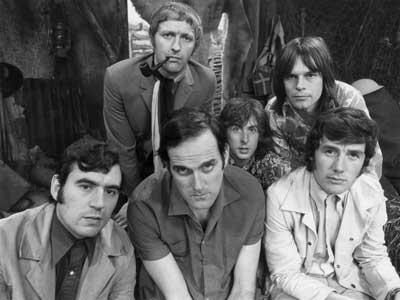 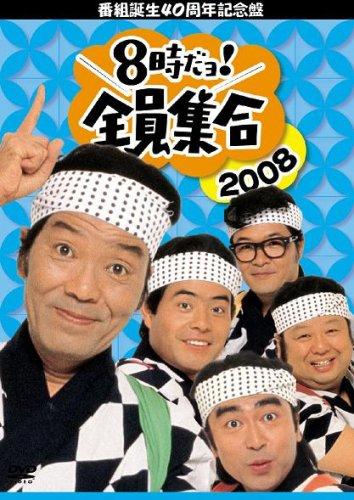 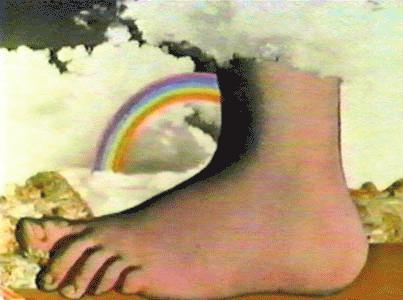 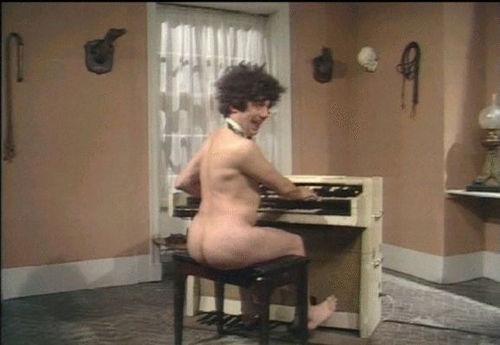 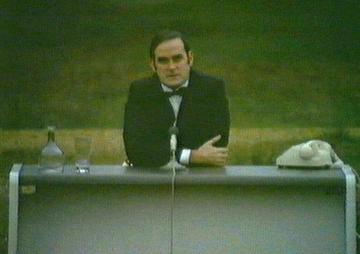 「現在來點完全不同的」（And Now For Something Completely Different） 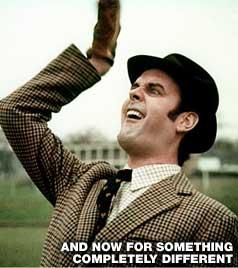 The Funniest Joke in the World： 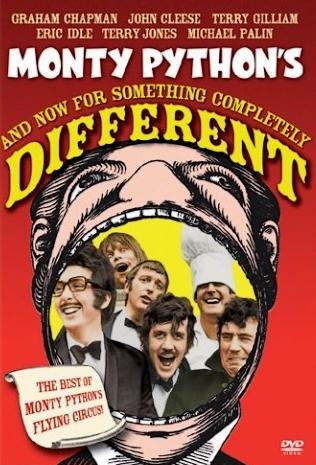 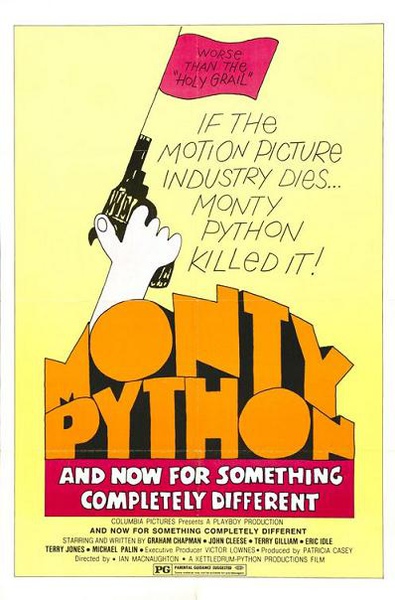