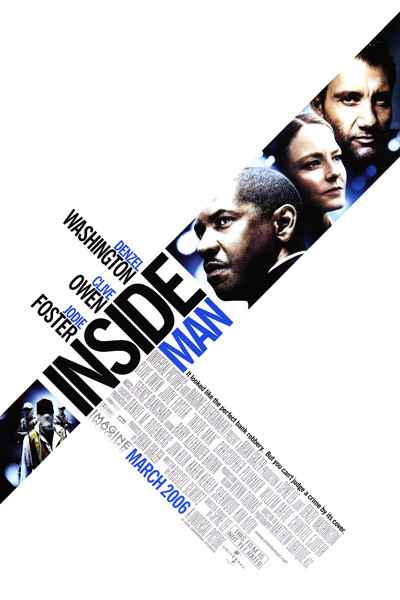 Inside Man opens with a closeup of Dalton Russell (Clive Owen) sitting in confinement, though the location of the cell he is in is not revealed. He muses, to the audience, the difference between a cell and a prison and offers to explain to the viewer his "perfect" plan for a bank robbery.[1]

The film flashes back to the robbers gathering in a van to prepare for the heist. (This begins the time frame that will carry most of the film; though there are several flash-backs and flash-forwards within). Led by Russell, the robbers enter a bank disguised as painters. They first use infrared flashlights to knock out security cameras and then brandish firearms and begin taking over the bank. The robbers hold the customers and staff hostage within the building and take their keys and cell phones. The robbers force all of the hostages to don the same clothes as the robbers, hooded coveralls with sunglasses and masks. This makes it difficult to distinguish robber from hostage—a critical part of the robbers' plan.

Meanwhile, the police arrive and surround the bank. Detectives Keith Frazier (Denzel Washington) and Bill Mitchell (Chiwetel Ejiofor) introduce themselves to Captain Darius (Willem Dafoe) and briefly discuss the situation. The scene then shifts to the office of Arthur Case (Christopher Plummer), chairman of the board of directors and founder of the bank, who seems quietly but deeply alarmed of the hostage-taking and the location.

Case hires power broker Madeleine White (Jodie Foster) to try to arrange for the contents of his safe deposit box at the bank to remain secret. White meets with a shockingly profane mayor to gain permission to enter the crime scene, and manipulates Frazier to let her talk to Russell. When she mentions to Russell the special interests she wants to protect, Russell, who had up to this point deliberately refused to make extended contact with anyone, agrees to talk to her. White enters the bank and speaks with Russell. When White requests access to the safe deposit box, Russell shows her a document, which the audience is led to understand indicates that Case had somehow received money from the Nazis during World War II for unspecified services that resulted in Jewish deaths. We learn that Case earned enough to start the bank where the hostage-taking has occurred. After assuring Russell that Case will make him a very wealthy man if he is able to escape the bank with this document, White leaves.

Attempting a bluff, Frazier tells Russell that his plane is ready but he needs to know that all the hostages are safe before he can let them leave. Russell allows him to enter the bank, and Frazier is taken on a tour of the building and checks all the hostages. Upon exiting the bank, Frazier suddenly attempts to aggressively overpower Russell, only to fail when another robber comes to Russell's aid. Intriguingly, Russell still lets Frazier leave unharmed with seemingly no repercussion for his attack. Later, in the police bus, Frazier reveals to his colleagues that he intentionally tried to provoke Russell, but as Russell did not harm him, it proves that Russell is not a killer.

Soon after, the robbers call and direct the police to point their cameras to a specific window on the second floor, where they show the execution of one of the hostages. An enraged Frazier confronts Russell again, demanding to know their true intentions. Russell simply replies that Frazier is "too damn smart to be a cop" and closes the door on him.

The hostage execution prompts the ESU team into action, and they plan to raid the building.They discuss several scenarios and their respective pros and cons. Since they cannot tell hostage from robber, they decide to use rubber bullets and take head shots to simply knock everyone out.

Frazier realizes that the written message Russell had initially sent out (and brought to the police command center) has a transmitter inside it. He orders Captain Darius, in command of police on the scene, to recall his men, but Darius ignores him.

Inside the bank, Russell hears the conversation between Darius and Frazier and is alarmed that the police plan to move in. Before the police can storm the bank, the robbers detonate smoke bombs throughout the bank. A horde of identically dressed robbers and hostages burst out of the bank through the smoke, in a mass of confusion. The police detain and interrogate everyone, but during the robbery, all the robbers (except Russell) had feigned to be hostages at one point, each of them making a scene so that the true hostages would incorrectly identify them as hostages. Thus, during Frazier's interrogations, he could not single out any robbers amongst them except for Russell, who was missing. No money is found missing and no people killed or seriously injured (it was discovered that the hostage execution was faked). No "robbers" were found and even the weapons left behind were merely toy replicas, leaving it as if the incident never occurred, prompting Frazier's boss to bury the case.

Frazier however keeps looking through the bank's records and finds the safe deposit box never appeared on any records since the bank's founding. He obtains a search warrant from a judge to open it. He is then confronted by White, who informs him of Case's dealings with the Nazis. She also tries to convince Frazier to drop his investigation, reminding him that she has held up her end of her deal with him (guaranteeing he would be promoted, and returning money he was implicated in stealing prior to the events of the movie). He refuses again, and points out there was no deal that he agreed to, and using a James Bond-style recording pen to replay the conversation.

White confronts Case about dealings with the Nazis, in which he confesses everything to her. He also reveals that the safe contained diamonds, including a Cartier ring, belonging to a Jewish friend whom he allowed to die at the hands of the Nazis in exchange for money. He is remorseful for what he did, and had thus led a life of philanthropy and humanitarianism to try to assuage his guilt.

In a major plot twist, it is then revealed that Russell hid himself behind a fake wall erected inside the supply room (literally, the "inside man"), where he was narrating from the beginning of the movie. He emerges a week after the "robbery" was committed, deliberately bumping into Frazier (who does not recognize him) along the way. Russell is picked up by his associates, and is presumably never caught. (Russell's associates—who are revealed to include a Jewish expert on The Holocaust who pretended to be one of the victims at the beginning on the movie—pick him up in an expensive Volkswagen SUV, which some viewers note as a possible reference to the protagonists' subtle triumph over Nazism.) Russell's associates ask him for the ring, and Russell reveals it is in good hands, namely Frazier's.

Frazier opens the safe deposit box to find the Cartier ring, a pack of gum (Russell had offered some to him when they first met, as a sign for Frazier that he was already in the safe deposit box), and a message, "Follow the ring." Interpreting this as Russell's desire for him to continue the case, he confronts Case, showing him the ring, and informing him of his desire to investigate it. He then finds White and indicates that he had discovered the ring was linked Case's past. He offers White the pen with the recording, and gives her a card to have the Office of War Crimes Issues at the U.S. State Department look into the situation.

At the end of the movie, it is also revealed that Russell helped Frazier with a personal problem of his own. Frazier had mentioned his girlfriend and how he wanted to propose to her but could not afford a ring. After his final encounter with White, Frazier goes home and finds a diamond in his pocket. He then realizes that it was put there by the man he bumped into in the bank (Russell). As the movie ends, it is implied that Frazier will use the diamond to propose to his girlfriend.