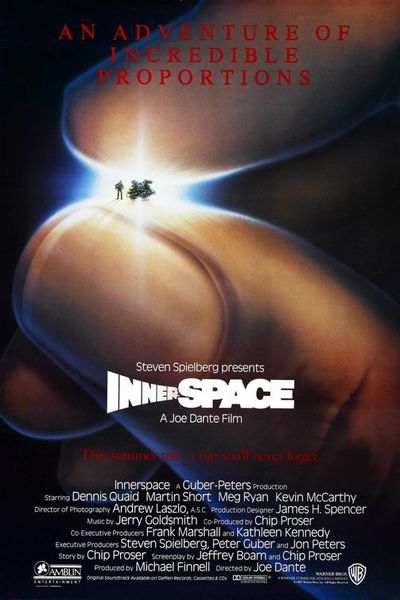 Down on his luck Navy pilot Tuck Pendleton (Dennis Quaid) is selected as a guinea pig to participate in an experimental project which will place him in a submersible pod, to be shrunk to microscopic size and injected into the body of a rabbit. Immediately after being miniaturized, the experiment takes a bad turn when the lab is attacked. The experiment supervisor Ozzie Wexler escapes with the miniaturized Tuck in a syringe. After sustaining a fatal gunshot wound, he injects Tuck and the pod into hypochondriac Safeway clerk Jack Putter (Martin Short).

After establishing contact with his new host, Tuck must figure out how to get out of Jack's "Innerspace" before he runs out of oxygen.

After making contact with the lab, Tuck and Jack are informed that there is another group of scientists and capitalists attempting to accomplish the same goal of miniaturization for use in their scheme to sell the technology for use in espionage. The raid on the lab was to steal a chip vital to the process. While at a restaurant with Tuck's girlfriend, Jack is kidnapped by Mr. Igoe and carried over the shoulder to a meat truck.

Now that they have the chip, they miniaturize Mr. Igoe, and send him into the body of Jack, to extract a second chip required for re-enlargement.

Igoe's craft eventually finds Tuck's pod, but is disabled after Tuck jams one of the pod's arms into a thrust port. Mr. Igoe abandons his craft using an ejection system, and attempts to crack the pod windows using a drill on his exosuit. Igoe is killed, however, when Jack's stomach ulcer acts up, digesting him.

With little time left to spare, Tuck's pod is removed from Jack and is enlarged.