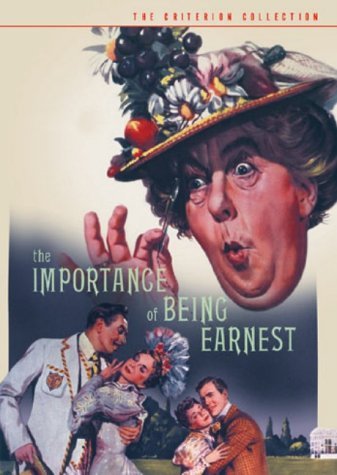 Algernon, an aristocratic young Londoner, pretends to have a friend named Bunbury who lives in the country and is frequently in ill health: whenever Algernon wants to avoid an unwelcome social obligation, or just get away for the weekend, he makes an ostensible visit to his "sick friend". He calls this practice "Bunburying".

Algernon's real-life best friend lives in the country but makes frequent visits to London. Algernon knows him as Ernest Worthing, but when the friend leaves his silver cigarette case in Algernon's morning room, Algernon finds an inscription in it: "From little Cecily, with her fondest love to her dear Uncle Jack".

"Ernest" is thus forced to disclose that he too is a "Bunburyist", though he rejects the term. In the country, he goes by the name of Jack (which has been his name for most of his life), and pretends that he has a wastrel brother named Ernest, who lives in London and requires his frequent attention. In the country Jack assumes a more serious attitude for the benefit of his young ward, Cecily, an 18-year old heiress and granddaughter of Jack's late adopted father. When in the city, he assumes the name and behaviour of the profligate Ernest.

Jack wants to marry Algernon's cousin Gwendolen, but faces two obstacles. First, Gwendolen seems to love him merely for his name, Ernest, which she thinks the most beautiful name in the world. Second, Gwendolen's mother, the terrifying Lady Bracknell, does not approve of Mr Worthing, and is further horrified to learn that he was adopted as a baby after being discovered in a handbag at a railway station. In her opinion it is absolutely below the standards of her daughter to "marry into a cloakroom and form an alliance with a parcel."

Meanwhile, Jack's description of Cecily, "excessively pretty", healthy appetite and disregard for education, has so appealed to Algernon that he resolves to meet her, in spite of Jack's firm opposition. Assuming the identity of Ernest, Algernon visits Jack's house in the country. Cecily has for some time imagined herself in love with the mysterious scapegrace Ernest, and is soon swept off her feet by Algernon.

Jack has decided to put his life as Ernest behind him and thus returns to his country estate with the news that his brother Ernest has reportedly died in Paris of a "severe chile". He is forced to abandon this claim by the presence of "Ernest", who threatens to expose Jack's double life if the latter doesn't play along.

Gwendolen, in turn, flees London and her mother to be with her love. When she and Cecily meet for the first time, each indignantly insists that she is the one engaged to "Ernest". The two engage in verbal conflict until Jack and Algernon appear and their deceptions are exposed. After walking away from them, their noses in the air, the girls soon forgive them and the couples reconcile.

However, Lady Bracknell arrives in pursuit of her daughter. She meets Cecily and seems to think of her as a suitable wife for Algernon — especially when the amount in her trust fund is revealed. However a stalemate comes about when she still refuses to countenance Jack's marriage to Gwendolen, while he, in retaliation, denies his consent to the marriage of her penniless nephew Algernon to his heiress ward Cecily.

The impasse is broken, in deus ex machina fashion, by the appearance of Cecily's governess, Miss Prism. As she and Lady Bracknell recognize each other with horror, it is revealed that, when working many years previously as a nursemaid for Lady Bracknell's sister, Miss Prism had inadvertently lost a baby boy in a handbag. When Jack produces the handbag in which he was found, it becomes clear that he is Lady Bracknell's nephew and Algernon's older brother.

With Jack's provenance established, only one thing now stands in the way of the young couples' happiness: in view of Gwendolen's continued insistence that she can only love a man named Ernest, what is Jack's real first name? Lady Bracknell informs him that he was named after his father, a general, but cannot remember the general's name. Jack looks eagerly in a military reference book and finds that the name is in fact Ernest John, and asks forgiveness over the fact that all his lies have been the truth.

As the happy couples embrace (including also Miss Prism and her clerical admirer, the Reverend Canon Chasuble), Lady Bracknell complains to her new-found relative: "My nephew, you seem to be displaying signs of triviality." "On the contrary, Aunt Augusta, I've now realised for the first time in my life the vital Importance of Being Earnest."